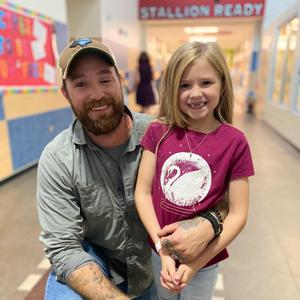 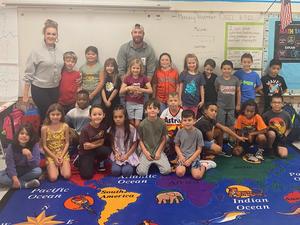 A U.S. Navy veteran and Comal ISD father surprised his 7-year-old daughter when he walked into her second-grade classroom at Clear Spring Elementary. They had not seen each other for more than 75 days. The homecoming was the perfect way to kick off Veterans Day celebrations.

Nov. 8, 2022 - A surprise homecoming for a U.S. Navy veteran and his 7-year-old daughter was the perfect way to kick-off Veterans Day celebrations in the Comal Independent School District.

It was a reunion that the two will never forget. Joshua Skapura is the beloved father of Evelyn Cox-Skapura, a second-grade student at Clear Spring Elementary and for the last year, he has been away from her and the rest of his family for months at a time with only short occasional visits.

That all changed Monday when he walked into her classroom with the biggest surprise of her life. He is home now, for good. The tears and hugs said it all. The sacrifices that military families make were evident in their embrace.

“I feel honored and appreciated to be recognized by the school,” Skapura says. “It meant the world to my wife, my daughter and me to be recognized for the sacrifices we’ve all made in my time being away both in the military and as a contractor.”

A Navy SEAL for 12 years from 2008 to 2020, Skapura no longer serves in the military but has been working as government contractor traveling all around the world helping other nations.

“There is a long line of heroes that came before me for this great nation who have given their time and lives, along with those who have given the ultimate sacrifice, and Veterans Day belongs to them,” says Skapura, who comes from a military family. His father served in the Army and his grandparents served in World War II. “I am honored to have served my country. The remembrance for those that have served is greatly appreciated.”

-U.S. Navy veteran Joshua Skapura has been working as a government contractor traveling to different countries for a year. On Monday, Nov. 7, he surprised his 7-year-old daughter Evelyn Cox-Skapura in her classroom with his homecoming.