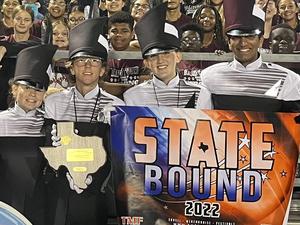 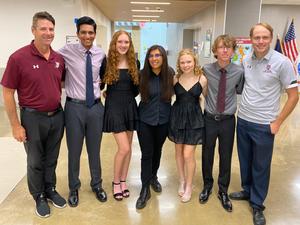 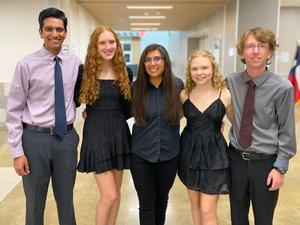 Congratulations to the Davenport Wolf Band and Color Guard for advancing to the 4A UIL State Marching Band Contest!
Nov. 1, 2022 - For the first time in 19 years, a marching band representing the Comal Independent School District will compete in a state UIL competition. The Davenport High School Wolf Band and Color Guard will perform its show entitled "Full Circle" 3 p.m. Wednesday, Nov. 9, at the Alamodome in San Antonio in the 4A UIL State Marching Band Contest.
The top 10 bands of 23 will advance to the finals which will take place in the evening on Wednesday.
"We are so proud of our students for advancing to the UIL State Marching Band Competition," says Jeffrey Keyes, director of bands at DHS. "We went from not competing the first year our school was open due to COVID, to 15th place at UIL Area in year two, to advancing to UIL State in year three."
That's right, the band program at DHS is still in its infancy. The campus is one of Comal ISD's newer high schools, opening its doors in 2020. In its third year, it is now making history as the third marching band in Comal ISD to compete at the state level, and the first since 2003.
The state-bound show is about circles, per its title, "Full Circle." Keyes explains that everything in the show follows the title from the music and color guard in the beginning returning at the end to the show's formations which are circular along with props and flags.
"On a deeper level," Keyes says, "the show is inspired by the idea that life often feels circular. The end of something is often the beginning of the next something. The work never ends, and the struggle never ends. It is up to us to stop and enjoy the process, the people and the experiences along the way.
"Sometimes life brings you full circle to a place you have been before to show you just how much you have grown."
The DHS Wolf Band and Color Guard consists of 140 students: 65 wind instrument players, 24 percussionists, 32 color guard members and 19 prop managers.
Congratulations and Good Luck at State!
Read more Comal ISD news here.